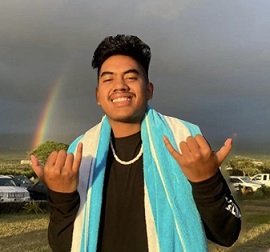 My whole life I thought that dreams were only that--dreams. Today, I've come to learn that the dreams and hopes in our hearts have been put there by the Almighty God so that we may partner with Him in bringing those dreams into life.

My name is Alik Jackson, and the Lord Jesus has put it in my heart to burn for, not only revival in his church, but for reformation in the island-nations today starting in Kosrae.

My relationship with my best friend and Lord Jesus began on August 9th, 2020, when I fully surrendered my life to His Lordship and received the Holy Spirit into my heart and life. It started when I was in my room in college at the University of Hawai'I at Hilo when I was scrolling through social media and came across a video of a group of young Kosraens and a few American kids my age going all out for Jesus at the Ali'I drive in Kona. Later, I came to find out that those Kosraen kids attend a fellowship called Kosrae Kona Fellowship and the American kids were attending a school called University of The Nations (YWAM) in Kona. I was so confused as to why people my age would cheer unashamedly for Jesus because it was not a normal thing for people my age where I come from. The normal "Christians" where I come from are "only-Sunday-Christians" and even on Sundays, we go just to have our attendance checked out at church; not because we want to hear from The Lord or to praise Him. Since the day I've given my life to Him, I've been chasing after all that He's been calling me to do.

I've been running in this journey with The Lord for two years now and I've been blessed enough to be under the leadership and mentorship of KKF youth leaders, KKF pastors, YWAM evangelists and so many more. In May 2021, YWAM evangelist Frenchie, at that point I had been under his leadership and mentorship for eight months, announced that he was going to sponsor me and two other Kosraen guys to attend the University of The Nations YWAM Fire and Fragrance 2021 September school. When he approached me and told me that the Lord put it in his heart to sponsor me, I was through the roof ecstatic because I've been wanting to go school at YWAM ever since I met Frenchie. I had seen how young people would go through YWAM and come out transformed from being addicted to all types of drugs, to being young messengers with their hearts on fire to spread the good news and advance the Kingdom to every nation. That is exactly what I wanted to do too--to use YWAM as a transitioning tool to find the path that The Lord has called me to.

The season that I'm stepping into next, is going to be in a school in YWAM called Foundations for Revival and Reformation. I am going to take this course after receiving a word from the Lord at the end of 2021 from a YWAM leader, a confirmation from a pastor in Uganda on January 1 of 2022, and another confirmation upon my arrival back in Kona from my mission trip to Uganda.

The Lord has set it in my heart to burn for the reformation in communities to improve the living standards in societies today the way that God wants it. After hearing about what Rev&Ref school is all about, I felt so moved by the Lord to pursue this path.

I would like to invite you to partner with me in this vision that the Lord is burning in me to bring about into life. The first thing I need partnership in is prayer. All that is done on earth is only because of prayer. It is prayer that moves heaven to come about here on earth, and so I seek your prayers to lead me in areas that the Lord may reveal through you.

The second area that I seek partnership with is financial investment into bringing this vision into being. If the Lord is moving your heart to partner with me in this vision, I seek $50 monthly investments. The Lord is so moving in the island-nations today and you can be a part of His reviving of the church and reforming the communities in island-nations. Thank you.

You may also give by check, if you like. Please make checks payable to "EquipNet" and make sure you include my account Equip3949 in the Memo Section on the face of your check.