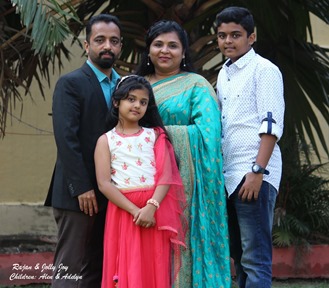 An Introduction to our ministry

Our mission is to equip and train the young people to missions, minister to families and kids through the love of Christ. Rajan & Jolly are long term missionaries with Youth With A Mission (YWAM) for the last 20 years. They have served in the missions in various capacities as the City Coordinators, East India area Convener, YWAM India National Board member, Advisory Member etc.

They Pioneered a base in the beautiful Archipelagos in the Bay of Bengal called Andaman & Nicobar Islands.

After hearing the sturdy voice of God they moved into the City of Kolkata, where 45lakh people reside, the main religion being Hinduism. They work among the marginalized and underprivileged people group who have no access to proper living conditions. Basically slum dwellers and the homeless, who migrate from villages in search of jobs to bigger cities. They serve them in the following capacities.

They have a great vision to start a regular school to provide better education to the slum kids.

Right now they are a team of 8 members, working passionately and tirelessly. We are here to bring the kingdom of God, in a season which is unfavorable for Christian workers. Persecution is on rise in this part of the world, we speak the freedom and peace of God.

Please stand with us and encourage our efforts by praying and giving towards our missions.