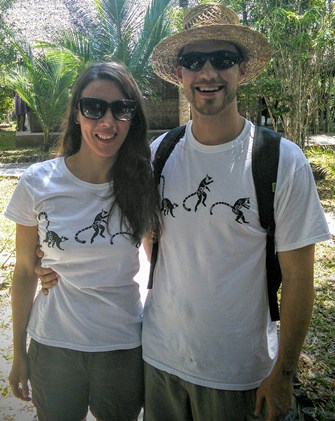 Seth and Vanessa met in Texas during their training for Mercy Ships in 2014, the largest non-governmental hospital ship in the world. They spent a year working on the ship in Madagascar, Vanessa as a nurse and Seth as a Hospital Out Patient Extension facilitator.

Vanessa was born in Hong Kong and moved to England when she was 12. She trained in London as a nurse, working mainly in cardiology and cardiothoracic surgery. However, her desire to serve the developing world with her nursing skills led her to study Tropical Nursing in 2013, and it was here that she became truly inspired in public health and primary care. Seth is a Kansas boy, born and bred, and his desire to serve the Lord comes as a direct result of how God pursued him with such love and compassion, all he wants to do is serve God in response to the love He has shown him.

They got married on 19th September 2015, in Devon, England, Vanessa's home. They then headed straight out to the mission field in Madagascar - they met doing missions, and that is how they wish to spend their lives, serving the Lord in whatever capacity He calls them to.

They have setup a local charity called Caring Heart, working with prostitute's in Toamasina, Madagascar, sharing the gospel with them and helping to get them off the streets. They are employing the women as cooks at their feeding program, where around 300 people are being fed five days a week. They are trying to creatively employ as many women as possible by splitting up their work day with training and education through a range of different classes, including Bible studies, health education, English lessons and leadership training. There are currently 10 former prostitutes employed by them, with more women wanting to join.